Welcome to the BoldGrid Questions Portal

If you do not have an account, submitting a question will allow you to create one.

Want to help us improve BoldGrid?  Please feel free to submit a Feature Request or a Bug Report.

This portal has been archived and will no longer be monitored.

You can browse new questions or ask your own in our BoldGrid Community Forum.

Ask a Question
No topics

Hello, I am using Primas theme on WordPress BoldGrid. I moved the Social Media icons from the header to the footer and now have issue aligning the Navigation menu and the logo to be in a straight line and reduce the header size. How can I fix this? There is no UI setting to adjust either the Navigation menu or the Logo to align in a straight line. The website is:  earthathon.org

I have tried working on head meta and css at no avail.

Anybody ever had this problem?

Hi there, I am trying to add a social media icon alongside the standard IG, FB, etc. It's for Coil. When i set my site up, it wasn't an option, so I am wondering how to replace the word COIL I have in my Social Media nav bar with the icon. From what I read, when you set up your nav/link bar for social media, BoldGrid automatically sources the icon. I tried this but it did not work from the Customize dashboard for my site. Any help is appreciated. Thanks!

This is only happening on one page. My 'shop' page that lists my packages shows the empty sidebar even when the page is live leaving a huge gap on the side and making the page display incorrectly. How can I disable this inactive widget? Nothing is in it.

Using the Wedge Theme (or other BoldGrid Version 1 Themes), there is a way to accomplish this, but it does take a little bit of advanced work. Here's how to do it:

You should end up with a code snippet that looks exactly like this: 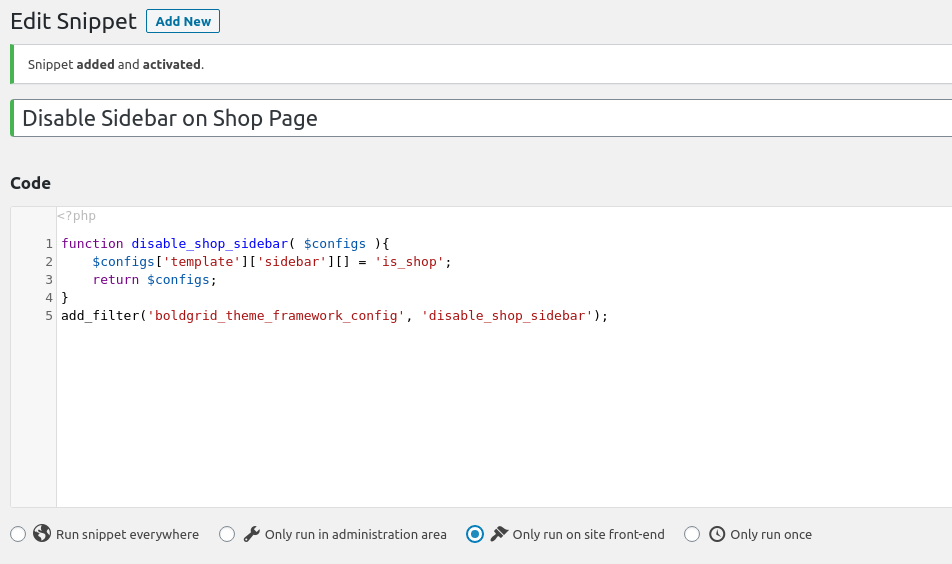 Once you've followed these steps carefully, your shop page will no longer have a sidebar. Please note that if there is any typo in the code snippet, it could cause a fatal error on your website, and you'll need to enable Code Snippets Safe Mode to recover your site.

I hope this helps! If you have any trouble, please let us know, we're happy to help.

Hi there, I have a lot of empty space on some of my pages, so I want to pull up the bottom of the page/main content area so the footer content at the bottom of page comes closer to the main content. So readers don't have to see a bunch of blank space. Can you tell me how to do this? Thanks...

I am looking for a way to re-size the side bar/header area (where the primary menu and logo is kept). I just want to reduce it a little as it's taking up too much of the left side of the screen

Hello,
There is one way to shrink the sidebar down to fit the content you have inside of it. You can use Custom CSS by navigating to Customize -> Advanced -> Custom JS&CSS and pasting the following code into the Custom Theme CSS field:

I hope this helps you! Please let us know if you have any more questions.

I'm trying to use some FontAwesome icons on a page.

In the BoldGrid developer's docs it says FontAwesome is one of the technologies used, and I can see the calls to it in the page headers, but I can't get any of the icons to come up, using code like

I'm probably doing something stupid, as I'm a Windows programmer rather than a web developer.

If someone could show me what I'm doing wrong, that would be much appreciated!

I am wondering how to disable sticky header so it is fixed stops scrolling with the page. I have tried to tinker with the CSS by adding a few codes but no luck so far. Thanks!

Home/Index page with no header. How?

Hi there, I'm not sure how to do this, I might want to create a home/index page without any header or menues, just some graphics and a simple ENTER button that would lead to the main site. In the past I did an index page as a portal to the rest of the site, which each page having the header/menus etc, but not on the first visitor page. Thanks for any info.

I am using the Resolve theme.  I edited my call to action on the homepage.  Now, anytime I add a widget, it puts a white border around the container.  How can I get it back to how it was without the border, or with the border transparent?